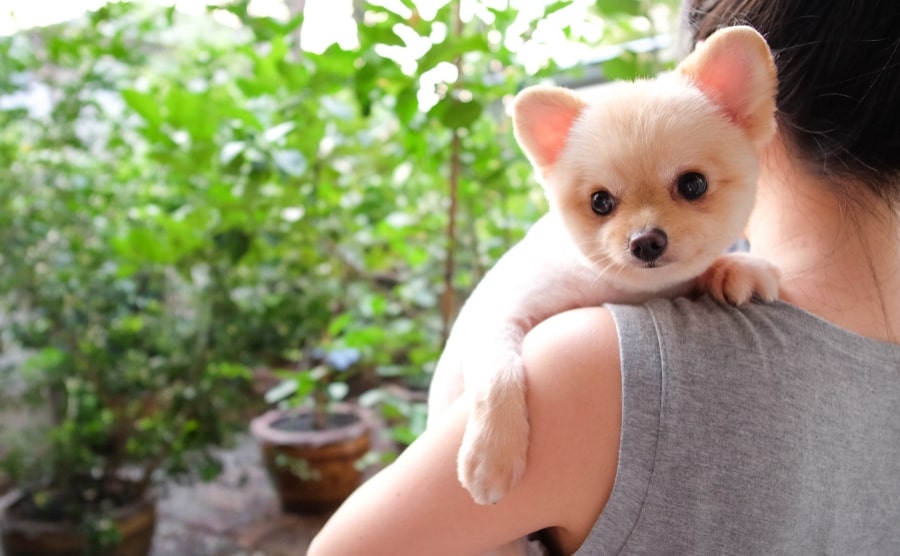 Pomeranians are so tiny and cute that you want to cuddle them and never let them go. But have you ever thought if your Pomeranian likes it when you hold them or they simply endure your embrace?

So, do Pomeranians like to be held? Yes, most Poms do. By nature, Pomeranians are affectionate dogs and wish to be as close to their owners as possible. Your Pomeranian is miserable when they’re alone, and there’s no one to pet or cuddle them.

So, what are the signs that your Pomeranian wants you to pick them up and how to hold them properly? Keep on reading to find out.

How to Tell If My Pomeranian Likes to Be Held?

Imagine that you’re as small as your dog, and someone much bigger suddenly picks you up. It sounds scary, right? Some Pomeranians feel the same and might try to wriggle free the moment you pick them up.

It could be dangerous if your Pomeranian manages to jump from your arms. Despite their fierce spirits, Pomeranians are fragile, and jumping from any height can lead to an injury.

That’s why you should know how to tell if your Pomeranian wants to be held. Let’s see.

1. Your Pomeranian Begs You to Pick Them Up

Does your Pomeranian whines and barks while standing close to you? Then it’s likely that your Pom wants you to pick them up and hold them. Some Pomeranians are very vocal and blunt when it comes to communicating their needs. As such, it’s easy to see that your Pom will appreciate being cuddled and petted.

Keep in mind that not all Pomeranians are fond of being held. However, some don’t mind it much as long as you hold them carefully and let them down whenever they wish.

2. Your Pomeranian Doesn’t Avoid Your Hands

Your Pom reads your body language well and knows when you have the intention of picking them up.

So, whenever your Pomeranian doesn’t want to be held, they will move away when you bend down to pick them and avoid your hands. Some Pomeranians might go as far as running away and hiding. Others might communicate their discomfort by yawing, lip-licking, or cowering.

In extreme cases, your Pomeranian might snap at your hands, growl, or bark.

So, if your Pomeranian doesn’t seem uncomfortable when you approach, they probably don’t mind if you pick them up and cuddle them.

However, some Pomeranians might show clear signs of wanting to be picked up only to move away. That’s probably because your Pomeranian has had a negative experience with being held and has mixed feelings about it.

3. Your Pomeranian Is Relaxed

To understand how your Pomeranian feels about being picked up, you should observe their body language. A Pomeranian who enjoys your cuddles will remain relaxed in your arms. Their bodies won’t be tense, and they won’t try to struggle to break free.

Keep in mind that some Pomeranians might have conflicting feelings regarding being held. They might want you to pick them up but get restless when you do. In these cases, you should let your Pomeranian go as soon as they become uncomfortable.

Why Do Some Pomeranians Hate to Be Held?

If your Pomeranian makes a run for it whenever you reach to pick them up, you might be wondering what’s causing this behavior. So, let’s see the most common reasons why your Pomeranian might hate to be held.

You pick up your Pomeranian with the best intentions of cuddling them and showing them how much you love them. However, your embrace might feel like a cage to your Pomeranian.

A lot of people think toy breeds like Pomeranian helpless, but that’s far from the truth. Your Pomeranian has an independent spirit and might not like it when you restrict their movements.

Moreover, your Pom’s first instinct in the face of danger is to run away. When you hold them, you take their options of running, and that makes some Pomeranians edgy.

2. Your Pomeranian Has Had a Traumatic Experience

As I already mentioned, some Pomeranians might have had a negative experience. Sometimes you need to restrain your Pomeranian in your arms for their own good. For example, when your vet has to examine them, vaccinated them, or take their temperature.

If your Pomeranian is a rescue dog, their previous owners might have handled them roughly. Such experience might leave a lasting trace and make your Pomeranian suspicious of anyone picking them up.

Socialization is crucial if you want your Pomeranian to grow up as a mellow and happy dog. That’s the period when your Pomeranian should get comfortable with people touching and petting them.

However, if your Pom hasn’t had much contact with humans or being held, they might not enjoy it as adults.

4. Your Pomeranian Is In Pain

If your Pomeranian suddenly doesn’t want you to cuddle them, they might be in pain. It’s easy for a Pom to injury themselves when they jump from your bed or sofa. Running around in the yard also might result in an injury or a bruise.

So, you’d want to consult with your vet if you think that your Pomeranian is hurting.

5. You Are Holding Your Pomeranian Wrong

Another reason why your Pomeranian avoids getting held is that you’re not holding them as you should. If you don’t support your Pomeranian well and leave their legs dangling, your Pom might get scared that you’re going to drop them. Moreover, you might be applying pressure to the wrong body parts and making your Pomeranian uncomfortable.

How to Pick and Lift My Pomeranian?

I’ve seen a lot of people who think that it’s fine to lift their dogs by the scruff of the neck. However, Pomeranians aren’t cats and don’t like it when you grab them by the scruff.

Mother dogs carry their puppies in such manner only when they’re very young. Then they stop doing it because it gets painful for the Pomeranian puppies.

Another incorrect way to pick your Pomeranian is by lifting them by the legs. You can strain your Pom’s muscles and ligaments by accident. Not to mention that it’s not pleasant for your Pomeranian, and they might break free.

Moreover, you should never attempt to lift your Pom by their collar because you can cut off their air supply. Furthermore, Pomeranians are prone to a collapsed trachea. As such, you have to be very careful if you’re using collars.

So, what’s the right way to pick and lift your Pomeranian? Just follow these tips:

So, do Pomeranians like to be held? Yes, they do. But you have to know how to pick them up and lift them to make holding your Pomeranian a pleasant experience.