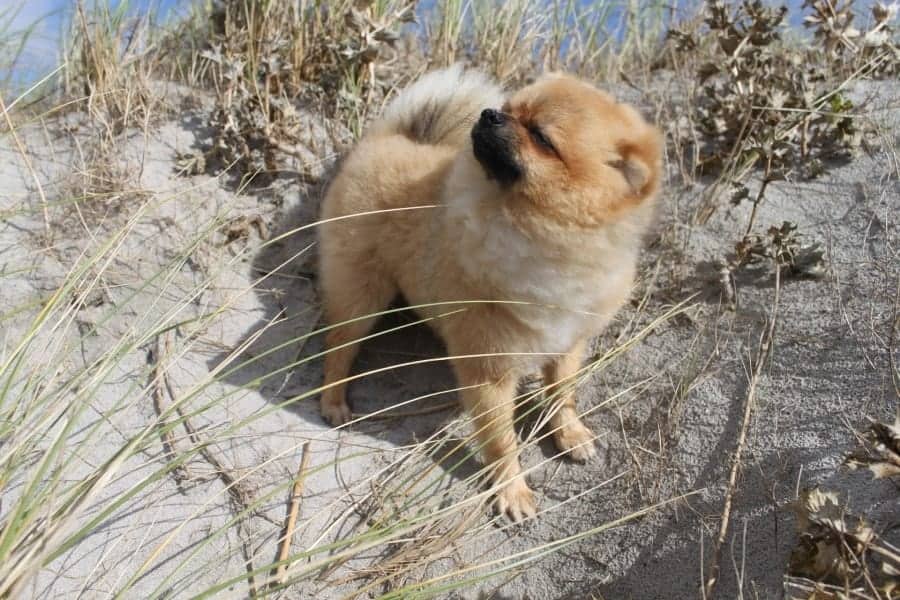 Whenever my family and I come home, leave the house, or hint at taking our Pomeranians out for a walk, the bark-fest ensues. I wanted to know more about why Pomeranians tend to have this reaction, so I researched why Pomeranians bark so much.

So why do Pomeranians bark so much? Pomeranians bark for many reasons, including wanting to protect you and themselves, boredom, joining the excitement around them, attention seeking, and reacting to outside disturbances like sirens, fireworks, and general noises.

Pomeranians are vocal dogs so it’s no wonder that they’ll be barking from time to time. But there’s more to it than just simple one-off explanations to their voice.

Why Your Pomeranian Barks so Much

Pomeranians are exceptionally vocal, social, and intelligent dogs that are full of life and love for the people around them. At least when it comes to my Pomeranians, they always seem to be the focal point of attention in my house. Why wouldn’t they? They’re so cute!

Nothing gets Pomeranians noticed more than when they start to bark. Sure, they may draw in some attention due to their cuteness, but they are professional barking machines under certain circumstances. While it may seem annoying, what they’re mostly trying to do is communicate.

When Pomeranians bark, they want you to hear their voice so they can communicate their message to you. It may seem like they’re just full of themselves (and they very well might be), but it’s almost certainly always coming from a place of love.

Pomeranians are the descendants of German Spitz dogs, which means their ancestors were strong, hard-working dogs mainly living in Arctic temperatures pulling dog sleds. This is a view into one of the reasons Pomeranians bark so much: they’re big dogs stuck in a small dog’s body! Spitz genes are still present in Pomeranians, so they still carry around with them this big dog mentality.

Probably the biggest reason your Pomeranian is barking so much is that they simply want to protect you. Whenever they think they hear danger or some uncommon sound around the house, they sound off the Pomeranian sirens. Why? Because they want you to know that there’s a potential danger on the way. They also want to be safe themselves, so don’t be surprised if they sound the alarms if they’re in trouble as well.

While Pomeranians can be some of the most social, extrovert dogs out there, they also want to keep what’s theirs. That’s why they may start barking if another dog starts to play with their dog toy. Or maybe another dog’s getting close to their food bowl. This is best described as self-protection, which is extremely common among all types of dogs.

Have you ever been so bored that you’d welcome drama to walk through the door? Well, believe it or not, this happens with Pomeranians! If they’re bored, that means they have a lot of energy and they’re ready to join in on any action. It’s strange sometimes how similar people are to Pomeranians!

Whenever I come home from the grocery store, picking up the kids, or something else, I always hear my Pomeranians barking their heads off even before I turn my car off. Let’s face it, our Pomeranians adore us beyond comprehension, so these situations are really because they’re excited to see you. Nothing is going to stop them from seeing their Pom parent!

A big reason is also that they’re absolutely confused, probably scared, and want your help at all costs. We’ve all seen how our Pomeranians react when fireworks or firetrucks and police sirens are going off. It’s most likely they need to be comforted and held close. Thankfully, it will pass.

Sometimes the Barking Is Too Much

Now that we know why our Pomeranians are such avid barkers, it would be nice to know how to temper it a bit when we need them to quiet down. As we all know, Pomeranians are rather intelligent dogs so it’s possible to teach them to a point on when to be quiet.

To keep a Pomeranian from barking too much, it’s generally a good idea to go up to them, look at them face to face fairly close, and say something like “Shhh!”. This isn’t meant to hurt your Pomeranian at all! What you’re trying to do is make them know that when they bark at inappropriate times, they’ll have to deal with you looking straight at them, saying a corrective statement, and having physical contact with them. This is an amazingly effective strategy and I suggest you try it out. Give it some time and see how it works.

If your Pomeranian seems to be bored and only starts barking because there’s nothing else for them to do, it’s probably time for a walk. The best cure for Pomeranian boredom is to drain that seemingly limitless energy source by taking them to get some exercise. Take them for a short walk to a park where they can play with other dogs or simply walk around your neighborhood. There’s no doubt this will calm them down.

If there are very loud noises like police sirens or fireworks and your Pomeranian is barking, it’s most likely due to them being frightened. In this case, it’s really hard to reduce their barking and to calm down your Pomeranian. All you can really do is to remove them from the situation or simply cup their ears. My Pomeranians hate the 4th of July and I’m sure they’d have no problems with our town banning fireworks!

Can Excessive Barking Hurt My Pomeranian?

Pomeranians can bark a lot and sometimes it seems excessive. While they might have the energy to belt out such consistently loud sounds, their lungs may not have that same strength.

Luckily this is not an issue with healthy Pomeranians. They can bark until the sun comes up and they won’t have issues with their throat or anything else related to their health. This is shocking due to the barking volume they’re capable of!

Unfortunately, a collapsed trachea is very common in Pomeranians and other small breeds. If your Pomeranian likes to bark a lot and they have a collapsed trachea, they may be letting discomfort occur while having the option to bark. In this case, I would try my best to reduce their barking for their own health by attempting to calm them down.

Now there is a situation where excessive barking can be potentially dangerous for Pomeranians, and that’s when they think they’re able to stand up to a bigger dog. We’ve seen this so many times with our Pomeranians and it’s always so funny.

Most of the time the bigger dogs pay no mind to small dogs when they’re doing this, but if your Pomeranian’s barking actually was to rile up a big dog, there’s no telling what could happen. I don’t know about you, but I always try to calm my Pomeranian down when they try to pick a fight with a bigger dog.

When Pomeranians Bark at Strangers

We all know the scene: you throw a get together at your house and guest-by-guest, your Pomeranian gives them an unwelcomed barrage of barks. Even if your Pomeranian might have met them before, they just won’t stop for the longest time.

Really what’s going on here is that your Pomeranian is wanting to keep you safe. As we know, dogs are our best friends, which means they also want to keep us from harm. Even though Pomeranians are the least threatening dogs on the planet, they’ll still have your back when you need (and don’t need) them.

The good thing about when Pomeranian barks at a stranger is that they look so cute while doing it that not even the stranger can get mad. It’s funny to see such an energetic puff-ball propel its voice for so long at such a volume. However, training your Pomeranian to be well-behaved is a goal every Pomeranian parent should achieve for their own peace of mind.

Do Pomeranian’s bark a lot? Pomeranians bark a lot when compared to most other dog breeds, including small dog breeds. They are very social, extrovert, and happy dogs, and this is often expressed with their voice.

How do you calm a Pomeranian? Calming a Pomeranian can be done by holding them, petting them, whispering to them, and making them feel safe. They are expressing their discomfort, so soft reassurance is a good strategy.